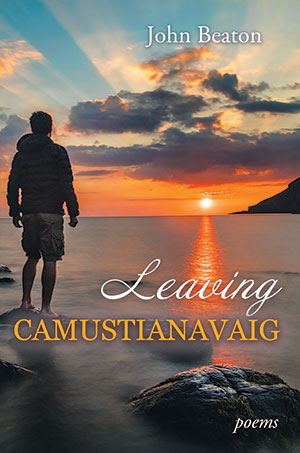 John Beaton’s Leaving Camustianavaig celebrates nature and coexistence and harmony with it, be it in his childhood Scotland, or his adopted homeland of Vancouver Island, with musings distilling the very essence of headwaters, wilderness, forest, mountains, the sea. Beaton’s masterfully crafted metrical poetry is deployed with linguistic prowess in a showcase of given and nonce forms—sonnet, sestina, triolet, villanelle, and others. The accounts of home and community, of the outdoors, or of eking a living from land and river are heartwarming and memorable. Along with its lyrical elegies of belonging, uprootedness, and reminiscences, this is a rapturous debut collection not to be missed.

John Beaton has a gift for writing formal poetry so well composed that the meter and rhyme are subsumed in the poems. This collection spans a life, starting with a childhood set in the Scottish Highlands where he was raised, and imbues the setting with irresistible vitality. Beginning with family, mortality, legacy, and loss, the poems then journey throughout a land passionately loved and gloriously brought to life. Poems about his adopted homeland in Vancouver Island maintain this unity and involvement in the natural world. The viewpoint may be human, but the land is a sentient thing. Its creatures act out their deepest impulses and are woven into the human experience until it becomes impossible to separate our existence from the cycles of nature. If you share a passion for, or even just a fascination with, the outdoors, the call of the wild, and the natural world as an extension of living and loving, you will treasure this book.
— Vera Ignatowitsch, editor-in-chief of Better Than Starbucks

From the Isle of Raasay with its “spray-sodden Hebrideans” to Vancouver Island half a world west, where salmon silver the rivers and wolves “tear savage furrows down the nightscape,” Beaton brings readers into an unforgettable world where past and present weave together like tapestry.
— James R. Babb, former editor of Gray’s Sporting Journal

I want to hold this book high and broadcast its power. It is to be reread and savoured. John Beaton’s words loup out of the mythic river, combining and recombining in the rainbowed spray of it; questioning, celebrating, lamenting and informing in myriad ways as they twist and birl, howl and skirl, laugh and greet, shedding light and love on the human condition through the prism of Scotland's ancient past and its present—to which I resonate as a Scottish fiddler who is fortunate enough to stumble into certain universal truths through the lens of the Scottish condition. Maybe I could undertake to compose an equivalent piece of music—a symphony, a suite, a thousand fiddle tunes—but any such attempt would come short because a master poet is at work here, on a large canvas. Herein lies an efficacious, loving, joyous use of language that transcends depth. This collection of poetry is the soaring song cycle of a bard in top form and it will accompany me on my journey from this point on.
— Alasdair Fraser, Scottish fiddler and composer

John Beaton’s poetry is metrical and has been widely published in media as diverse as Able Muse and Gray’s Sporting Journal. He wrote a monthly poetry page for several years for the magazine Eyes on BC and served for four years as moderator of one of the internet’s most reputable poetry workshops, Eratosphere. He recites his poems from memory as a spoken word performer and a poet member of the band Celtic Chaos. His poetry has won several awards, including the 2015 String Poet Prize and the 2012 Able Muse Write Prize for Poetry. He is a retired actuary who was raised in the Scottish Highlands and lives in Qualicum Beach on Vancouver Island, Canada.

Signup for book & other news!